The Anatomy of Clickbait 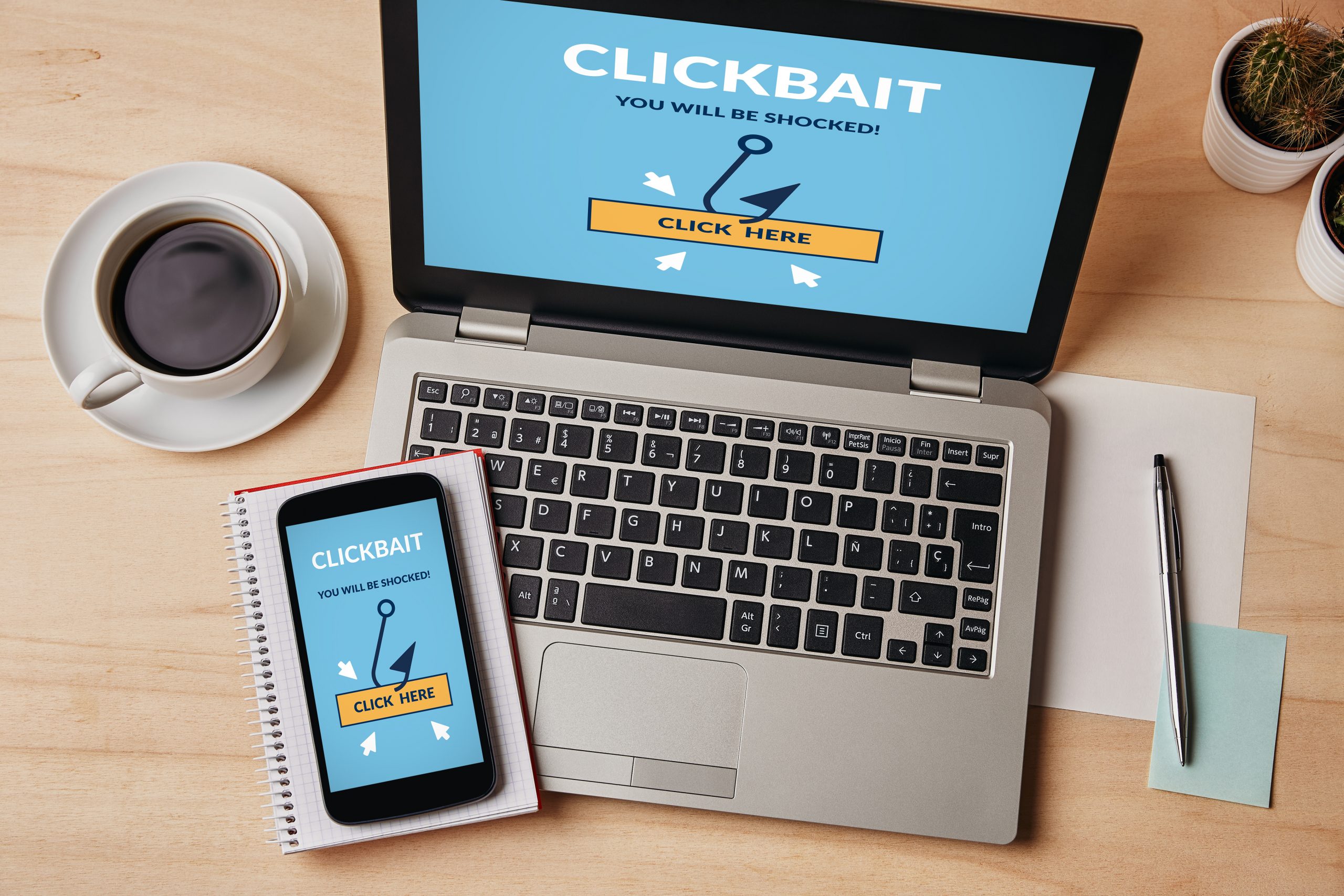 Ah, the clickbait. The nemesis of the online (meaning every) reader. Whether you know its definition or not, you have seen it many, many times, perhaps even today. In fact, if you look closely, you’ll spot it hiding in plain sight as the subtitle of this very article, albeit strictly for illustration purposes.

Clickbait is despised by many, leveraged by quite a few, and blissfully taken by everyone else. A direct descendent of yellow journalism, always promising and never quite delivering, it has been perfected by generations of headline writers. Then one day, it was planted in the rich soil of online media, with its fast turnaround, ruthless fight for readers’ attention, and, most importantly, ad-driven models — and has prospered beyond anything its inventors could have imagined. Their techniques seem quite naive and straightforward when compared to today’s sophisticated headlines, engineered to make us click, and A/B-tested to perfection.

Yet, despite the seemingly endless variety of clickbait headlines, their power lies in a fairly small set of simple formulas that we’re about to look at.

But before we start taking clickbait apart, let’s pause for a moment. After all, what makes a clickbait title bad? It’s making people read the article, but isn’t this exactly what a headline is supposed to accomplish? Fine, maybe it’s a bit disingenuous, but it does the job. You get the click, you get that read, you get that impression. It works. Then what’s wrong with a little sensationalization?

Technically nothing. It is still up to the reader whether to click on the title or not. And yes, it does the job, otherwise, it would not have been everywhere, like weeds in an abandoned garden. The problem with clickbait is not inefficiency. The problem is that while it’s quite efficient in generating clicks, it’s not good for building an engaged audience. Why? Precisely because it’s a little (or a whole lot) disingenuous. Who wants to deal with someone known to cheat in business affairs? And that’s exactly what a clickbait is. A cheat.

A title is a promise from the writer to the audience. It sets the expectations, invites readers in, and, once they accept that invitation by clicking, passes the baton to the article’s text to deliver the promised goods. What turns a title into clickbait is that those goods are never delivered — or delivered in a way that leaves a bad aftertaste. So you do get that click, but most likely, you don’t get a returning reader.

That’s why the easiest way to see a gallery of freshly minted clickbait headlines is to scroll down to “From Our Partners” or “Paid Content” sections of almost any online media site. You’ve seen those titles, accompanied by matching photos. Whether they promise you to see what some aged celebrities look like today or offer immediate savings precisely in your area, they all have the same simple objective. Their authors are not interested in building an audience, in fact, they know that readers won’t be bookmarking those pages filled with flashing ads. They are interested in clicks — and they get them in droves despite (or rather thanks to) the obnoxious brute-force simplicity of their titles.

So why write about clickbait? Why not let them flourish in the warm damp corners of media sites, attracting unsuspecting visitors?

One, I believe that the prevalence of clickbait titles has been shaping the headline styles of many writers and editors who actually want to build an audience. By leveraging clickbait formulas they are not only losing readers who could have stayed, had titles matched the content better, but also turning away readers who like me are allergic to any title that smells like manipulation. So if you spot a pattern in the list below that sounds like something you use in your own writing, this may help you phrase the next headline differently.

Two, if you write on a platform like Medium and want your content to be promoted by editors, using a clickbait title is one of the best and fastest ways to ensure that they will steer clear of an article.

And finally, I think as readers, we can help each other avoid disappointment by shining a spotlight on patterns we find particularly clickbaitish.

The Cogs of the Clickbait Machine

And now, without further ado, in no particular order, some time-tested clickbait formulas. While each one of the works fine on its own, they are even more effective when combined.

This is the simplest trick in the clickbait book. Perhaps the most powerful, too. Its effectiveness lies in the fact that it says very little (and sometimes, even absolutely nothing) about the content of the article. Instead, it focuses on the readers’ own reaction to that content, almost challenging them to give it a try:

“The Way They Look Now Will Make You Roll Your Eyes”

“You Will Not Belive That Statement”

“Try Not to Gasp When You See THIS”

A variation of the first formula, this one goes even further, by avoiding any promises — whether about the content or about the readers’ future reaction. Instead of promising the readers how they will react, it talks about the reaction of someone else. It also hints at a double delivery: one about the original story and a bonus one about someone’s reaction to it:

“The Wife Screamed When She Heard the News”

“A Story That Made a Whole Town Lose Sleep”

Not mentioning the content of the article altogether is not necessary. Many clickbait titles successfully talk about it, while still saying nothing. The key is to be vague. Just replacing every noun with “this” or “they” makes even the most mundane event sounds like a mystery novel.

If you write, “A Couple Finds Their House Flooded Due to a Plumbing Problem,” the title likely won’t be getting much clicking. But run it through the vagueness machine — and you get a solid performer: “They Never Expected to Find THIS When They Came Home.”

The reader is intrigued. Who are they? Why were they not at home? And WHAT did they find? Was it a tiger? A meteorite? An alien spaceship in the backyard? Enter His Majesty, the Click.

Simple and efficient, personalization is a magic wand that makes anything relevant. While vagueness and descriptions of reactions speak to the readers’ curiosity, personalization suggests that they may be missing something important for them if they chose to ignore the article. Location services and audience targeting make this technique even more effective on news sites, but a simple “if” keeps it just as powerful. And mentioning health, wealth, happiness, and anything that has to do with well-being typically works like a charm:

“If You Are After 50 You Must Read This”

“This Is Why People in Your Area Are Growing Concerned”

“Starting Your Morning on Your Phone? You May Be at Risk”

Facts can sound boring. Opinions can sound irrelevant. Emotions, on the other hand, tend to bypass logic. Which is why they are so common in clickbait titles. The key is to make them strong, the stronger the better. Also, strong and negative. Calm and happiness don’t sell that well.

“Don’t Infuriate Your Readers by Writing THIS”

“The Truth About Your Salary May Shock You”

To be clear, the use of emotions in a title does not turn it into a clickbait (otherwise The Grapes of Wrath would be a great example). It’s more of an amplifier for the impact of other clickbait formulas — but a very efficient one.

6. Cite an authority. Or a celebrity. Or both.

A little namedropping can do wonders when it comes to making people click. Especially, if you combine it with rule two (describe someone’s reaction) and hint at a bigger story. You don’t even have to use a name — just mentioning someone’s prominence elevates the importance of the message.

“The Queen Says ‘Enough is Enough!’”

“This Harvard Professor Is Sceptical of the Changes”

“These Celebrities Claim Everyone Is Wrong About Them”

Another (very simple) way to amplify the impact of any clickbait is to, well, amplify. It doesn’t matter what the title describes, it can always describe it a bit stronger. Just add words like extreme, horrible, terrifying, brilliant, desperate, enormous, monstrous — and the clickbait’s open rate starts climbing up. And it’s always okay to amplify an amplifier. The headlines below are real:

“An Extremely Brilliant Way to Pay of Your Credit Card”

“The Smartest Way to Pay for Home Renovation”

“Pay Off Your Credit Card Debt at a Furious Pace”

This list is far from complete — the clickbait book is not that long, but it certainly has more formulas. But the formulas above are enough to illustrate the point: clickbait’s a sleazy practice that can damage your audience-building efforts. No to mention, it makes the reader feel deceived. And if you need a refresher on what it feels to be deceived by a headline, scroll up and take another look at the subtitle. See what I mean?

As a bonus, here’s a snapshot from a well-known respectable site (it doesn’t matter which one, since these headlines are everywhere).

Recognize any formulas at work?